Today I am in a poor mood, because after doing some major cleaning all morning I made a new mess in the afternoon with patching walls and priming.  An ice dam caused water damage in two areas of the kitchen, but I hadn’t painted yet thankfully.  (Now I climb out the window and shovel the roof after heavy snows.  Fun.  I’m also brainstorming some more permanent solutions for next winter.)  The priming is for the crown moulding and bead-board.  I have done some priming over two days now, and it all just feels like a waste of time, like I am just causing ugly, because it turns formerly crisp looking paint into something out of a toddler’s colouring book.  See? 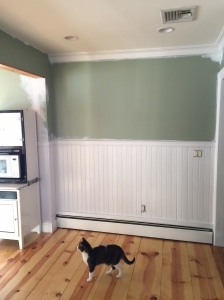 Ugh.  You don’t not want to see the “before” of the ripped apart wall.  I cannot wait to finally finish the priming and painting!  I don’t know about you, but sometimes I need a completed project for a nice sense of accomplishment to keep me going, and it has been too long since I have felt that motivation.

Yesterday I made some changes in the main floor bath.  The previous owners had done a little renovation, which was beautiful and preserved a lot of the original 1960 charm, but I saw a few details left to upgrade.  They had installed very nice brushed nickel fixtures, but the tub drain was left in the original chrome.  It also didn’t work.  The toilet handle was chrome too, and it is an easy thing to switch (same with the doorknob that I already changed.)  I can’t find the handle on Amazon, but it is by Moen and cost around 15$ at Home Depot.  Look near the faucets and towel bars rather than getting stuck with the selection available in the toilet repair section.  😉  The instructions are clear, so I’ll just show you before and after.  The only thing that did trip me up was that I had forgotten that the nut holding the handle on is the reverse of normal.  I was so frustrated trying to unscrew the darned thing, haha.

On to the tub…

The kit to replace the drain is from Amazon.  It looked nicer than those I saw at the store and had good reviews.  The old drain was a little tough to unscrew but not terrible.  I used pliers to get leverage, like this:

I had an awful time getting the linkage out.  It was stuck which probably explains why it wasn’t working.  Advice online said to spray WD40 and let it soak, but my WD40 was missing since the move so I tried orange oil (since it dissolves grime well when I use it to clean up antique/vintage sewing machines.)  It worked and pretty fast too.  Meanwhile I had been taking the drain apart and found a huge clog of hair.  Ugh.  I have a photo all ready, but I suppose I better spare you.  😀  It was as large as my fist!  Here is the linkage after it finally came out:

I attached the new piece to the linkage with the old cotter pin, adjusted the height, then tried to stick it back in place.  That was another hard part, but finally it was in place and seemed to function.  I’d added a new gasket between the plate and the tub although the old style one was behind the tub, because I’d noticed that it was leaking into the basement when my husband filled the tub.  It all appears to work properly now.

Lastly, I hung up a small wall cabinet to store things.  Aside from a shelf tower in the bath there was no storage at all, and although I am undemanding for bathroom cabinetry compared to most people there is a certain amount required so that the basics aren’t sitting on the toilet tank.  😉

I found it at Homegoods on Wednesday and hadn’t even been thinking to get one, but it seemed like such a wise idea that I reluctantly parted with some cash.  The glass is nice, I think, and I really like the way the white of it melds into the wall.  The plan has been to paint a greyish purple above the bead-board, but now I am strongly considering painting the lower portion and trim instead of the upper walls.  Decisions, decisions!